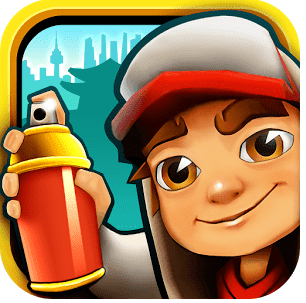 Subway Surfers Apk Latest Version is one of the most popular, renowned and most playable adventurous game available in market which has been developed by Kiloo and SYBO Games and published by Kiloo on 24 May 2012. After gaining fame as best mobile game for Android, iOS, Kindle and Windows Phone 8 you can now download and install this game to your Microsoft Windows.

You can enjoy playing this game alone as single player but with Facebook you can compare your scores with your friends playing this game. It has very easy gameplay according to which all you have to do is make your character run as fast as he can to save him from Inspector and the Dog. It is basically designed in a metro and gives a look of metro railway station where you need to run as fast as you can.

While running you have to pass many obstacle and need to dodge the trains coming in your way and collect the gold coins. This game includes so many characters in it which you can select to play the game but in default there is only one character open whereas you need to unlock other characters by making good scores and collecting as much as coins you can.

You can download this game with various different cities locations in it. Along with gold coins there are some takeaway too which you can collect and open up later. You can also buy various other stuff with the coins you have collected.